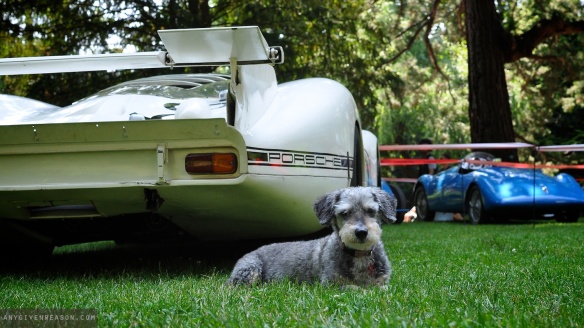 Anyone from overseas who has experienced the European classic car scene will be familiar with the feeling of discovering the rarest and most interesting vehicles in the world and marveling as they are almost ignored by jaded locals who seemingly take them for granted. Just another classic car show in France? Worth a look, I guess.

Last year I was traveling through France, and on my way to Switzerland I made a detour through the industrial city of Mulhouse to visit the famous Schlumpf collection. I was only intending to stop for a day or two, however it soon became apparent that I had chanced my visit to coincide with ‘Festival Automobile de Mulhouse’, a weekend classic car festival beginning the next day. It seemed to be one of those government tourism commission type events which usually aren’t very good, but I didn’t have any firm plans and I needed to catch up on some writing, so I decided to hang about and take it in.

Festivities kicked off on Friday evening with a small display of cars in Place de la Réunion, the historic town square. It was an odd mix of largely B-list modern supercars that was punctuated by a Bugatti Grand Sport Vitesse Roadster. I’m not sure what to make of the Veyron. I don’t really like it, but I also can’t help but appreciate the engineering that goes into a fully street legal factory road car with 1,200hp that does 0-100 in 2.6sec and will crack well over 400km/h. And the build quality is superb to match. END_OF_DOCUMENT_TOKEN_TO_BE_REPLACED

You don’t need to say it because I can already hear the calls. ‘Hunting exotic cars in Monaco, that’s a little bit like shooting fish in a barrel, isn’t it?’

Well, yes it is. But that’s no reason not to do it. I mean, what else are you going to do in Monaco? Unless you’re the kind of person who is happily granted entry to the Hotel de Paris or you’re a diehard Formula One anorak, there’s no real reason to come here other than to witness obscene wealth of others. It does have a certain charm, but Monaco doesn’t really offer anything that can’t be found elsewhere on the French Riviera.

However like most readers of Any Given Reason I’m into cars and boats and rally and Formula One, so Monaco was a must-see destination while recently traveling around the Riviera. And the cool thing about not giving a damn about obscene wealth is that I had no issue with attempting to fit in or looking like a tourist, which meant I had no issue with taking photos of the cars.

Because lets be honest – taking photos of nice cars parked on the street is probably the most un-cool thing you can possibly do. But I like interesting cars, so whatever.

The heart of Monaco and the centre of its ‘supercar barrel’ is Casino Square, the tourist filled block of land that acts as the valet area for the most opulent and exclusive hotels and casinos in the Principality. END_OF_DOCUMENT_TOKEN_TO_BE_REPLACED

Any Given Reason is currently exploring the Italian/French Riviera, as as such finding it extremely difficult to justify spending any significant time behind the computer. Rather than rush what will be some pretty interesting stories, it’s probably best to wait until the time is available to do them justice. Even moreso considering that the next two weekends will also be spent at two of the premiere motorsport events in the world – the Italian Grand Prix at Monza and the Goodwood Revival. Definitely two posts not to be glossed over.

After a short break, AGR will most certainly be back into it in full swing. And until then, here’s a small sneak preview of what you can expect… 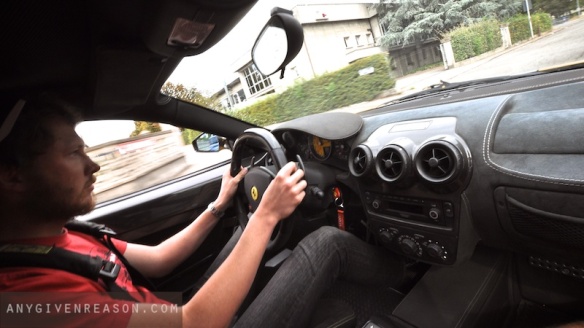 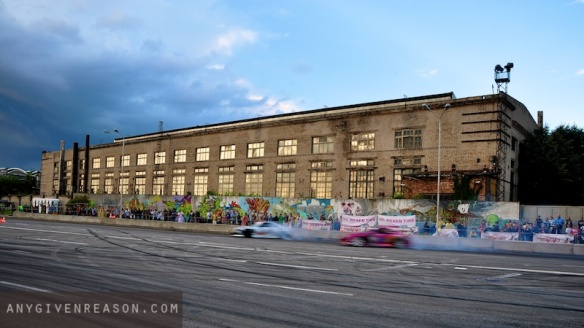 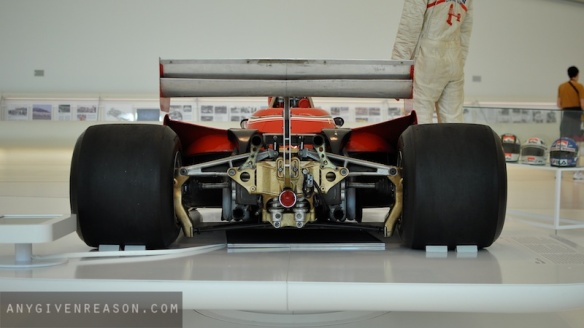 Words and photos by Andrew Coles

Mulhouse isn’t the typical city most tourists usually visit. Located so far in the East of France that it’s almost in Germany (in fact it was a German city in semi recent history), it’s a lovely town, but with the famous Champagne producing regions on the Paris side and Switzerland on the other, it’s typically skipped by most travelers for its more scenic neighbors. But for over fifty years Mulhouse has been home to the largest automobile collection in the world, and for me it was one that simply couldn’t be missed.

The Schlumpf Collection is probably most well known for housing two of the world’s six Bugatti Royale’s, however its chequered history is arguably more interesting than those two large cars. The Brother’s Schlumpf, Hans & Fritz, were an odd pair. Their interest in cars was only beaten by their almost obsessive dedication to their mother, and the boys worked hard before the second world war building their textile empire, with Fritz finally acquiring his first Bugatti which he used in local races. All of that was put on hold with the outbreak of war, and once the war finished the brothers put everything they had into further building their textile empire in Mulhouse. By the time of the swinging 60’s, the brother’s had enough spare capital to acquire a couple of cars. 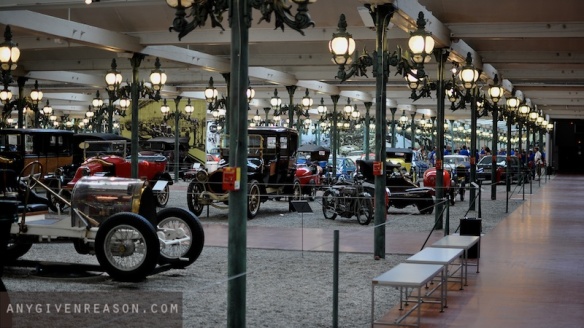 The term ‘a couple of cars’ is of course used very loosely as they built their collection at a fanatical rate from the early 50’s through the mid 60’s. The brother’s contacted the likes of Enzo Ferrari offering to buy cars, and with a particular penchant for the local Bugatti brand (located just down the road in Molsheim), they struck up a friendship and bought direct from Ettore himself. They famously sent a letter to every member of the Bugatti owners club with an open offer to buy their cars, which in 1963 resulted in the acquisition of an entire 30 Bugatti American collection in one hit along with several individual cars.They bought ten racing cars from Gordini, three Lotuses from racing driver Jo Siffert and several cars from the Mercedes Benz factory museum. With new prosperity after the war people were looking to upgrade their 1920’s and 30’s automobiles, and the Schlumpf’s used this wholly to their advantage.

Even as their textile business began to falter in the 70’s as cheaper production emerged in Asia, the boys kept building their collection in total silence. They employed 40 staff to work full time restoring and maintaining the cars, who were each sworn to secrecy and forced to sign non disclosure statements about their work. The collection grew as production at their factory further declined, so the Brother’s converted one of the disused warehouses into a museum to house their now 400 strong private collection. They employed yet more staff to lay red tiled floors and create grey gravel display areas and installed thousands of replica Parisian lamp posts. All of this was just for themselves – the collection was still top secret. END_OF_DOCUMENT_TOKEN_TO_BE_REPLACED

The word epic is regularly used with nonchalance to describe things that, whilst maybe quite exciting, are still reasonably ordinary. However, the word Epic is a perfect and apt description of the Peking to Paris rally, a challenge for classic and vintage cars quite unlike anything else that exists. 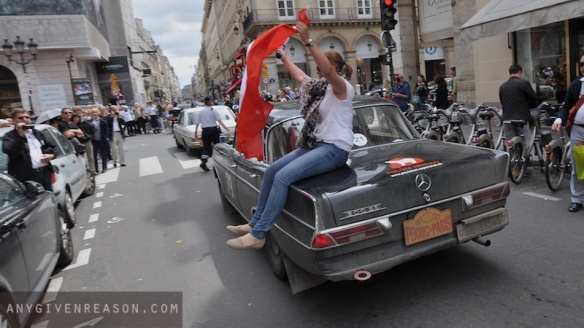 The Peking to Paris is 33 days straight of rallying across some of the most remote and inaccessible places on the earth. Mongolia. The Gobi desert. Russia. Eastern Europe. Whilst the third annual modern recreation of the 1907 pioneering event is somewhat watered down compared to the original with modern GPS, support crews and travelling mechanics provided by the organisers, it is still one hell of an adventure and even making it to the finish is an achievement in itself. 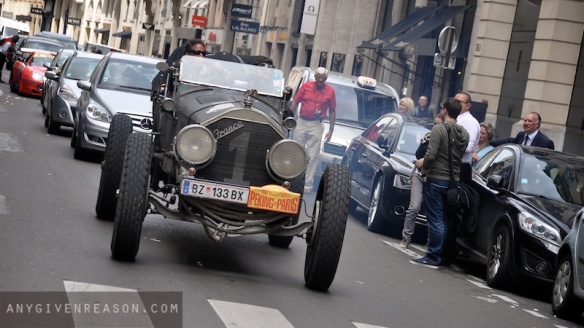 You’d seriously think twice about driving some of these cars down to the shops on a cold day let alone across the largest single land mass on earth in one hit. 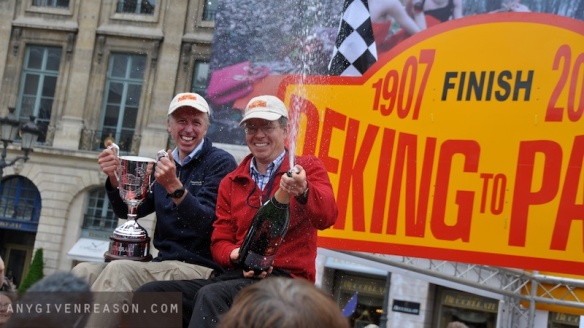 Any Given Reason was at Place Vendome in Paris a few Sunday’s ago to welcome the cars home across the line, along with thousands of other friends, family and curious onlookers. It wasn’t just a time to celebrate for the winners – everybody was happy to be here.

The families of the crews in particular were the happiest. The competitors were competing right up until the day before the finish, and still had a 150km drive into Paris that morning to cross the line. The families hadn’t seen the crews since the rally started over a month ago, so were waiting with great anticipation for their loved ones to appear in the traffic. END_OF_DOCUMENT_TOKEN_TO_BE_REPLACED 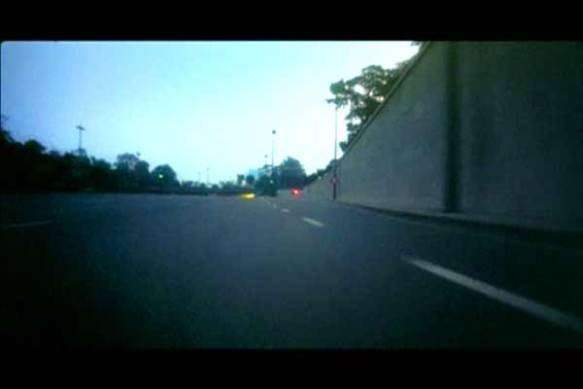 I’m sure most of us aren’t exactly up with our French cinema history, but we are all familiar with the film C’était un rendez-vous by filmmaker Claude Lelouch. A ten minute fast blast through the deserted streets of Paris at 5.45am one Sunday morning in August 1976, the film has become the automotive cult classic. Strapping on a Go Pro, driving too fast and then uploading it to Youtube isn’t anything special today, but it was groundbreaking in the 70’s.

Legend surrounds this film and at the time of its release it was unknown who the driver was, Lelouch’s starring role only becoming public knowledge in the late 90’s. As it turned out the car was not a Ferrari, rather Lelouch’s Mercedes-Benz 450 SEL 6.9, dubbed with the sound of his 275GTB. The film highlights a deserted Paris like will never be seen again – even in the wee hours, it’s far too busy now to film another Rendez-vous.

The title translates to “It was a date”, with Lelouch giving himself ten minutes (the length of a single roll of film), to race across Paris to Place du Parvis du Sacre Coeur in the arty Montmarte district to meet his girlfriend Gunilla Friden, Miss Sweden 1968. 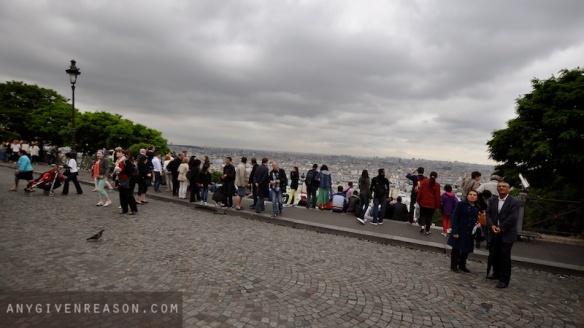 While in Paris, and in honor of this groundbreaking film, a visit to the finishing point was necessary. A lot has changed since that morning in 1976, yet it all looked strangely familiar.

Sure, there are far more people about now. But it’s unmistakeably the same.

There was a crawling traffic jam through one of Paris’ more exclusive shopping districts the other day. Drivers were becoming impatient and horns were beeping, but above the urban noise rose a sound quite unlike anything else. 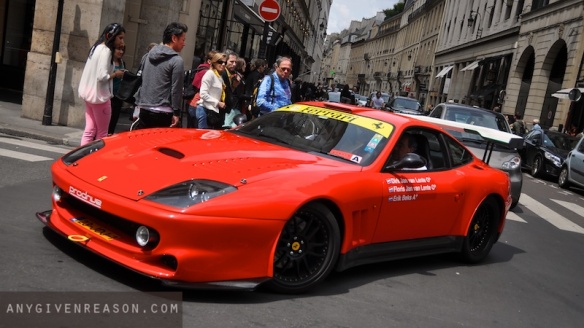 Finally, a properly modified Ferrari emerged! You’ve got to be very careful when modifying these cars and most get it wrong, but this one was oh-so-right (with the possible exception of the wheels – white 5 spoke OZ’s would set this 550 on fire). Drawing obvious inspiration from the Prodrive prepared 550’s that tackled Le Mans and raced the GT circuit back in the early 00’s, this 550 really did look like it was lost on the way to the track.

This is the genuine Le Mans 550 in the Prodrive museum, spotted when I visited Prodrive a few weeks back. As far as race replica’s go, this is a pretty good one. 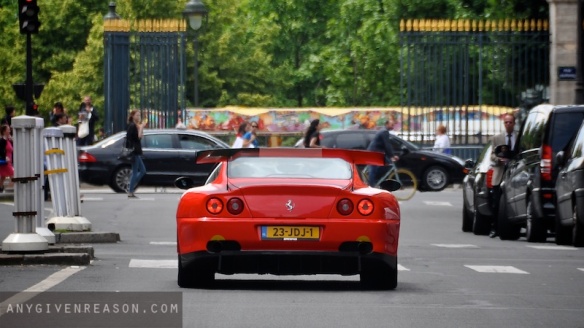 And it wasn’t just a bodykit either – the V12 was the recipient of some serious work and what sounded like straight pipes made everyone aware of that. The driver tired of the jam, and when an open side road appeared I’m reasonably confident he visited the redline in that short space. The noise was pure racecar – drowning out everything in its wake with the howl of a race prepared Ferrari V12, with the overrun roar sounding arguably more impressive. It was something to behold.

Any Given Reason
Blog at WordPress.com.